Although there is a wide range of closures available ,the conventional bore sealing has, to date, been the most widely used method of sealing containers .Bore seals are inexpensive to manufacture and are relatively easy to fit. However, bore seals are do not form hermetic , flexible or even reliable seals- they leak. There are three types of closures available, which are either inserted into the neck of or form a combination of two. The effectiveness of this seal can be affected by temperature, natural relaxation & mechanical properties, all of which will cause seal to leak, especially in transit.

Using the Induction Cap Sealing Technology, it's now possible to create alternative, alright, hermetic seals on the necks of containers. The process can produce significant cost savings. The seal is strong, flexible & yet easy to remove, and provides protection against cross contamintaion and an effective tamper-evident layer.

We see a pulp board packing material as the retaining wad, the wax dot pattern layer , the aluminium foil and the sealing film. The lines of force radiate through the foil and induces current flow in it. This increases the temperature of the foil. Due to this , the sealing film melts and adheres to the lip of the container. After the seal is broken, the board or foam packing is retained by the cap. 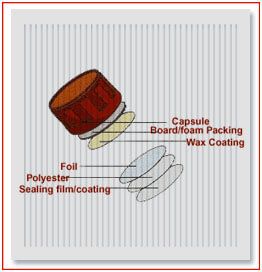 The process of Induction Cap Sealing is based on the principle that a conductive material i.e. Al Foil heats up on exposure to high frequency magenetic field generated by an Induction Unit. This is a non contact process without direct heat transfer.Due to this, the sealable closure liner can be placed in the cap by the manufacturer. The Wad consists of a board packing material, a wax layer, aluminium foil and a sealable film. The screw cap combination passes through the induction unit after closure of the container.when the container is under the induction head, heat is developed into the aluminmium layer.The wax layer starts to melt and penetrates into the board layer.The Sealing layer also melt & forms a tight seal against the lip of container. The necessary pressure is provided by the liner/screw cap combination.On opening the container, the board remains inside the cap and serves as a seal on further use, whereas the aluminium foil is permanently sealed on the rim of the mouth of container.

Innerseal can be used on containers made of PET,PVC,Polythene,Glass and other thermoplastics.They are suitable for use with screw type Snap On,Child resistant and other customer closures as long as the seal is in positive contact with the neck of container. A uniform neck finishing is required for good Induction Sealing.The sealing are not to be very wide.The small 50 ml to the big 200.Its Drum having a neck size of 10 mm opening to the wide mouth of 120 mm can be Induction sealed.Induction Sealing liners for HDPE,LDPE,PET & PP in the different thickness locally available. 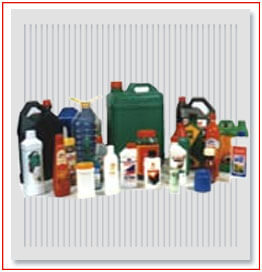